What is management, or more to the point, what is good management?

According to Scott & Rochester (1984) good management is about three things: 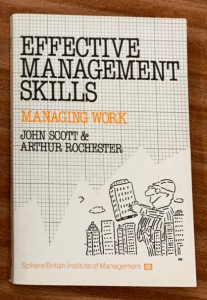 It is believed by many that good management is about moving:

“what is actually happening”

“what should be happening”

However, Scott & Rochester point out that it is perfectly reasonable to move things in the other direction. And in reality, good management always rests on finding a happy medium between those two ends of a spectrum.

What exactly are we trying to do here?

The agenda for this 20 minute session as a small image: 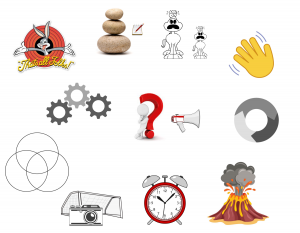 Careers advisory services have their own agenda, and a box ticking mentality. It’s their job to fulfil their remit, and that means satisfying their superiors. If you’re lucky, one of the by products of their machinations might involve placing you one step closer to a career that really suits you.

One day, back in the 1970s when I was aged about 15, I was sent to see the school’s careers advisor. A middle aged woman, whom I have never seen before (nor ever saw again) ran through a short, prescriptive routine, and it went something like this:

“Tell me about yourself, what do you like doing, what school subjects do you like, and what makes you tick?”

In those days, I was an active teenager, I liked to get out and about, cycling, swimming and flying gliders. Until you join a gliding club you don’t realise how physical it is, lots of moving gliders around on the ground! My other big hobby was making transistor radios, amplifiers and all sorts of weird things that could be put together on a circuit board, with a soldering iron. That was a step up from making Airfix model aeroplanes. And, my favourite subjects at school were Maths and Physics.

I explained all of this to the school’s careers advisor, and stressed “I believe I’m intelligent, I’m dexterous, and I like building things. I’m also sociable and I like to converse with a wide range of people.”

Her response (with almost no hesitation) was a disproportionately forceful “travelling, washing machine repair man”. I was stunned . . . and silently I thought to myself “you have not understood a single word I have said”. Most of all, I thought she was insulting my intelligence by insinuating that I should accept a role doing little more than routine manual labour.

Detecting my silent bafflement she added “you would use your hands to make things, it requires intelligence and skill, and you’d get to meet lots of people”.

It was a short encounter in the extreme, during which the overriding thought entrenched in my brain was “I will never, ever talk to another careers advisor again”. I had imagined that I might like to become a fighter pilot!

Over the next day or two, discussions with my school friends led us to conclude that the advisor possessed a short decision tree that had only 8 questions and 16 answers. That’s short enough to memorise easily, and to allow the advisor to confidently and consistently deliver answers like nurse, vet, chef, car mechanic and travelling washing machine repair man! What the advisor had singularly failed to point out is that there are thousands of possible career paths, that she could not possibly cover them all, and that any comments made should be construed as simple indicators rather than as absolute determinations.

One thing this encounter certainly did achieve was my desire to never work as a careers advisor! Which is paradoxical, because I was invited to speak at the Digital Shoreditch Festival in 2012, to an audience of secondary school pupils, on the subject of careers in IT. And, now I’m publishing a blogpost about careers advice!

Anyway, at one stage I was a secondary school teacher of ICT (a career change that didn’t last long) and somehow during my teacher training I came across this valuable missive which is variously attributed to Plato, Aristotle, and later luminaries. In 2012 that became the central theme of my Digital Shoreditch talk. In summary it went like this:

“Consider your skills, your passions, and the needs of the world. Where they intersect, therein lies your calling.”

I finished my 30 minute talk by leaving this slide on the screen.

I had stressed that you’d be lucky to satisfy all three parts of the Venn diagram straight away, but if you could start with just one, then two, and then maybe one day you’ll get to join all the dots and find that third link.

A few years after that (by this time I was 56 years old) that Eureka moment struck me, and the dots joined up! It happened when I was talking to parents at another student event, this time hosted by UCL. After my main presentation I often have people vying to have a more personal discussion with me, and I will never forget this particular enthusiastic pair, the young Asian mum and her daughter. I was explaining Plato’s model and the Venn diagram in more detail. Explaining how you must use a pen and paper, prepare three columns, and actually write down your skills, your passions; and suddenly (for me) the “needs of the world” component sprang out of nowhere. Eureka! Trying to keep my focus on the young mum and her daughter, we had a really highly charged and animated discussion! If you meet me in real life, I may share the detail with you.

This leads me to the other valuable piece of careers advice which Steve Jobs gave me in 2005. Actually, he gave it to a lot of people, he was the guest speaker at a graduation ceremony at Stanford University.

In the UK we call it a graduation ceremony, in the USA it’s a commencement ceremony, meaning the starting point for your working life.

Watch it all. It is well worth 15 minutes of your life, and it may change your life for ever. There are three messages in that speech and whilst I mention only “join the dots” you will find equal value in all of them.

This is me, paraphrasing Steve’s message and effectively it says:

There are two secrets of success. Firstly, to be in the right place at the right time; and secondly, to recognise that!

And finally, you must write things down!

“The best way to get things done is almost always to make a plan . . . and more specifically, to write down your plan. Research has shown that visually mapping out your tasks by writing engages the mind more than typing, and that leaves us more connected with our material, more connected with the things we need to get done. The frontal lobe of the brain, which is responsible for writing, also controls planning and problem solving. Just the simple act of handwriting your goals brings you closer to implementing them.”

I will (again) let Plato finish the presentation for me:

“Consider your skills, your passions, and the needs of the world. Where they intersect, therein lies your calling.”

On the public speaking circuit you may come across a young, intelligent and highly articulate chap named James Garnier. It’s a true pleasure to listen to his dialogues and to really involve yourself in the deeper questions that he puts to his audiences.

Inspired by the diaries of Thomas Mann, one such presentation is entitled “More Pastries Please” and it explores the thoughts of a 10 year old child who has the free run of a cake shop. Ostensibly, the idea is that the child’s parents want to demonstrate that everything has natural, inbuilt limits, which at first we may not have realised. So, imagine your 10 year old self, and imagine yourself entering the grandest cake shop from your childhood. You are permitted to buy and to consume as much as you like! Your regular favourites, the ones reserved for special occasions only, and a myriad of other treats and fancies that until now you have never had a chance to sample! No limits! How much is enough? Fifty? One hundred? One hundred and fifty?

The reality is that even the most determined of 10 year olds will probably struggle to eat anything more than ten cakes in a row. And having demolished ten, they may then regret their over indulgence. No matter what number you though might be “enough”, you’ve over estimated! As adults we do the same thing.

James leads his audiences through the story into adulthood and then poses the question “how much money is enough money?”

Quickly followed by “and then what?”

That’s a fantastic question! Whilst most of us may struggle to answer the first one, let’s assume we’ve done so, and let’s move onto the second. You’re happy enough, you’re wealthy enough, and you have no worries on the financial front. So where do you turn your attention and your energy now?

The observations that follow come from a wide variety of sources.

Throughout history there have been certain eras that can be defined by where the wealth was and what was done with it. This blog is not suggesting that you need to go to the extremes set out in the examples below. The point is to highlight a few cases of what others have done, and to help you think about your own meaningful contribution to the world, the world as a whole, or just your world, just the bit that you can influence . . . positively.

Ancient Egypt was once a vast, wealthy empire with Pharaohs who were mere mortals in spite of the fact that the populace at large regarded them as gods. And, knowing that you (as Pharaoh) are going to die, the only thing you can do whilst you’re alive is to plan some monumental legacy to remind everybody else of your former greatness. The Pyramids!

The Roman Empire followed with its Colusseums. And when the Romans faded the Church continued the pattern with its enormous Cathedrals.

These massive legacies still exist today. Traces of former greatness, Pyramids, Colusseums and Cathedrals. However, nowadays few (if any) new examples of these extravagant buildings are ever constructed.

Until relatively recently you could easily follow the money by following the largest buildings. The agricultural barons and the landed gentry built enormous houses. And now they are Stately Homes, which are open to the public and which are trying hard to survive.

In the past 100 years, the banks and the finance houses have taken over. A look at any of the tallest skyscrapers in The City or in Docklands, will lead you to a bank or a finance house. And whilst the banks are currently leading the pack, what’s coming next?

The data centres and the IT companies. Symbolism in a different form, and in remoter locations. Not as “in your face” as a Pyramid or a Cathedral, but in a subtle way these data centres, these bland, flat monoliths, are a symbol of where the wealth is moving.

The wealth is also moving online and becoming more intangible. How many Amazon bookshops have you ever visited? Actually physically visited? Dell computer stores? Auction houses run by eBay?

You no longer have to build a legacy which is tangible, it can be intangible. But one thing is for sure, we are all mortal.

On leaving the Chapel of Rest after the recent death of a close friend, one mourner was asked “what did he leave?” She replied “everything, he left everything!”

You can’t take it with you.

1 “How much money is enough money?

Forget about the money – what do you really want to be remembered for?